By Niki McCuistion – Your comments appreciated.

Free Speech is under threat on many college campuses with students taking a stand- some demanding censorship of hateful, disrespectful and bullying expressions of speech, others advocating against any censorship that threatens free inquiry.

Neil Foote, M.S.J.,M.B.A – Principal Lecturer, the University of North Texas Mayborn School of Journalism, and Nancy L. Hamilton a partner at Jackson and Walker, L.L.P who concentrates on First Amendment law, join host Dennis McCuistion to discuss the concerns with free speech on college campuses and the growing censorship towards speakers who may have an unpopular viewpoint for some. 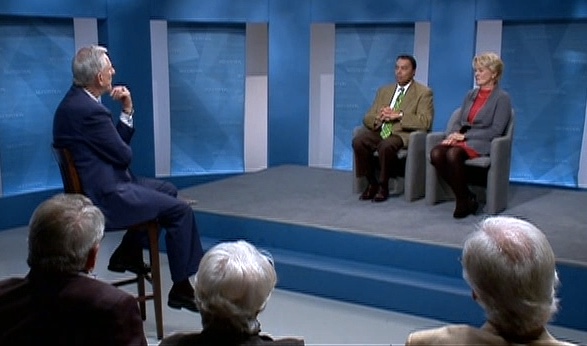 One of the purposes of a university is to expose people to different ideas argued with evidence and logic and augment the experience of students- with civility. How can a university educate and expose students to diverse viewpoints and still provide safe havens? Should they limit who is invited to speak if they disagree with the speaker’s premise?

Charles A. Murray, Ph.D, Author of Losing Ground, and a free speech absolutist joins in from a prior interview, discussing the incident which occurred at Middlebury College in Vermont, a highly regarded liberal arts college. Dr. Murray, invited to speak by a campus student organization was shouted down, ending his presentation. Attempting to leave the campus, he and a Middlebury professor were physically assaulted, resulting in injuries to the professor.

The school’s President Laurie L. Patton and leaders of the student organization, who invited him, admitted that even though they disagreed vehemently with Dr. Murray’s views on social welfare programs and race, they said the campus failed in its duty to exemplify how to debate unpopular ideas with civility. Ironically, Middlebury is a highly regarded liberal arts college, which prides itself on creating and sustaining a learning environment that fosters engaged discourse.

In an opinion piece in The Atlantic, Greg Lukianoff, president and chief executive of the Foundation for Individual Rights in Education argued that today’s students are “coddled” and demanding protections against offensive words and ideas at the expense of intellectual rigor and the First Amendment.

Some students believe colleges should ban speech that may be racist or defamatory. According to a 2017 Brookings Institute poll of 1,500 students nationwide, more than 40 percent of students believe the First Amendment does not protect hate speech. Almost 20 percent believe using violence is an acceptable means to stop such speech, and 53 percent of students – 61 percent Democrat and 47 percent Republican – believe colleges and universities should prohibit offensive speech.

A 2016 Gallup survey 54 percent polled said the climate on their campus “prevents some people from saying things they believe because others might find them offensive.”

Join us this Sunday for some provocative viewpoints on the First amendment and censorship
And see where you weigh in.

The First Amendment (Amendment I) to the United States Constitution prevents Congress from making any law respecting an establishment of religion, prohibiting the free exercise of religion, or abridging the freedom of speech, the freedom of the press, the right to peaceably assemble, or to petition for a governmental redress of grievances.

Join us to discuss another controversial viewpoint on McCuistion, where as always we are talking about things that matter with people who care.

One comments on “Is Free Speech on Campus an Oxymoron?”