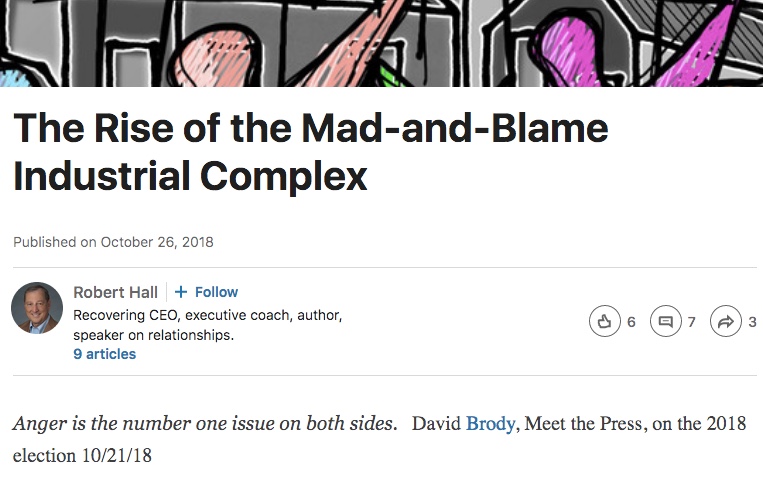 Maybe the whole country needs to enroll in mandatory Anger Management training. Many of us have witnessed a nation – historically raucous and spirited in our political and religious beliefs – become obsessed, increasingly mad and blaming regarding our differences. It seems that every choice or issue you face – views on immigration, NFL football, Supreme Court nominee, Chick-fil-a fast-food, Nike athletic shoes – has political “sides” and a single culprit we can self-righteously blame: those on the other side.

Headlines about the pipe bombs sent to critics of President Trump are but the latest cycle of a downward spiral. A coup has taken place right before our eyes – the mavens of madness have seized control. President Trump lauds a Montana Congressman for body-slamming a reporter. Former Attorney General Eric Holder threatens when they go high – kick them. Rush Limbaugh advises that you can’t compromise with liberals, you must defeat them. Hillary Clinton says you cannot be civil with the other political party. Politicians are run out of restaurants and harassed at airports. Last year Congressman Scalise was gravely wounded and three others shot at a Congressional baseball practice. The Supreme Court hearing lead to threats against Judge Kavanaugh and his accuser, Dr. Ford.

Nothing just happens anymore. Everything is categorized into a simplistic, partisan zero-sum game where the evil of the opposition causes all bad outcomes.

The reasons behind all this “mad-and-blame” are varied and complex, but let me focus on just one that is very powerful. The rise of the Mad-and-Blame industrial complex. The forces of money and power have conspired to create strong incentives for a new super-industry. This new super-industry is built on five key society segments greatly incentivized by eyeballs, attention, money and power to stoke our anger, rile-up the masses and blame the other side. Once-upon-a-time leadership was lauded for compromise and working together for the greater good. Today, not so much. To paraphrase a quote of the Vietnam War era: Our business is making people mad and business is good.

We mostly think of these five pillars in silos, but – intentional or not – they have colluded to create a powerful new thing: the mad-and-blame industrial complex.

Our personal identity has increasingly become a political identity tied to who we oppose and even hate. While President Trump is arguably the most divisive and caustic President in our life-time, this trend started years before he entered politics in 2015. Karl Rove’s grand strategy to get George W. Bush elected president was to appeal to his base – rather than the traditional practice of moving to the middle for the general election. It worked and the country lurched right. Then President Obama successfully extended the strategy and we lurched left. Now President Trump drives the country hard-right. No surprise that 80 percent of Republicans and 8 percent of Democrats approve of Trump – similar to the huge majority of Democrats and tiny percent of Republicans who approved of Obama.

According to Pew Research, for about half of us our greatest political motivation is not who we vote “for” but who we vote “against.” For example, in June 2016 while 78 percent of self-identified white evangelicals planned to vote for Trump, 45 percent were mainly voting against Hillary Clinton and only 30 percent were voting for Trump himself. Likewise, close to half (46%) of those planning to vote for Clinton said theirs was more a vote against Trump.

Anger has become the “go-to” fund-raising source. When Maine Senator Susan Collins announced late-afternoon her intention to support Judge Kavanaugh, activists raised more than $3 million to oppose her re-election by 7:00 p.m. Political fund raisers salivate to transform inflammatory statements by the opposition into donor contributions. Mad raises more money than glad. Political funding, voter turnout and power are driven like never before by how mad you can make your supporters at the opposition. In essence, politicians transform our anger into their power.

The press, once viewed as objective reporters of news, is now mostly viewed as on one side or the other – churning out “fake news.” Talk radio and cable news are huge megaphones for partisan views. CNN and MSNBC lean heavily left and FOX leans heavily right – all heavily focused on who they are “against.” So, the press has devolved from objective to advocacy to adversarial journalism.

The much-reviled President Trump has been very good for business. Veteran TV anchor Ted Koppel recently stated that cable news would be lost without Trump: “CNN’s ratings would be in the toilet without Donald Trump.” National newspapers, magazines, and cable news have seen a spike in subscriptions and ratings since Trump exploded on the political scene.

We once said, “if it bleeds, it leads.” Much of today’s press has moved beyond blood, they – like docu-crime shows – are rewarded for repeatedly convicting their go-to bad-guys. The media monetizes anger.

Like traditional media, technology and social media make money off customer engagement. The difference is that tech and especially social media is much more interactive. Rather than producing programming, they have convinced us we are the stars of their shows; but, rather than pay us, we work for nothing while giving away our precious data – a currency they convert into dollars. Since emotion is a big driver of engagement, they have enhanced our abilities to incite each other while they shovel in the money. As YouTube star Matt Lee points out, “divisive content is the king of online media today, and YouTube heavily boosts anything that riles people up.”

Apple CEO Tim Cook this week described just how powerfully destructive this engagement cycle can be:

“Our own information is being weaponized against us with military efficiency. These scraps of data…are carefully assembled, synthesized, traded and sold…Your profile is a bunch of algorithms that serve up increasingly extreme content, pounding our harmless preferences into harm.”

“We see vividly, painfully how technology can harm, rather than help…platforms can magnify our worst human tendencies… deepen divisions, incite violence and even undermine our shared sense of what is true or false.”

The average 8-18 year-old spends 7 hours and 38 minutes while the average adult spends more than 9 hours per day on devices drinking-in this potion. In essence the tech world has monetized our information, creating hugely profitable, monopolistic platforms designed to drive us mad.

Businesses have historically focused on appealing to as many customers and customer segments as possible. But, as Millennials and others have criticized business as standing for nothing but profits, some very successful businesses have moved to create more purposeful and sometime more political brands, angering some customers. CVS stopped selling cigarettes and saw their brand preference rise 50 percent.  Chick-fil-a became the most profitable fast-food franchise despite being closed on Sunday for religious reasons and their founder’s public opposition to gay marriage.

Nike provides the most recent, high-profile example. When Nike embraced Colin Kaepernick for their 30-year anniversary of the “Just Do It” campaign, they galvanized their core customers – cool, hip and slightly unconventional. Yet because of Kaepernick’s kneeling during the National Anthem at NFL games and critical comments about police, some supporters of law enforcement, the military, and the flag were inflamed. It is too early to know the results but Kaepernick has been tagged the $6 billion man since Nike’s stock value jumped $6 billion by late September despite a 30 percent Favorability decline overnight after the ad dropped. David Armano at Adweek called it “a choice that almost delves into activism.”

Today, what you drive – Prius or pick-up, your athletic apparel, pharmacy, fast-food – all signal your likely political/religious affiliations and by extension your tribal enemies. Companies now design products and brands to signal and accentuate our divide. They are monetizing our mad-and-blame for sales growth and profits. It transforms capitalism into a system that profits from divide.

Faith and belief are rich in potential for healing and reconciliation, but organized religion has become increasingly viewed as a source of division. As the country and especially Hollywood, the liberal press and universities embraced abortion, gay marriage and relaxed sexual codes – conservative religious groups – Christian, Jewish, Islamic — pushed back, becoming more politically active. Love thine enemies often devolved into defeat thine enemies.  Moderate became a dirty word. To quote Sam Harris: among extreme groups, moderates are viewed as “nothing more than a failed fundamentalist.”

The Anti-Defamation League reported that 64 percent of Americans believe religion is under attack and nearly half (45%) agree right wing-religious groups are seeking to impose their beliefs on everyone else.   Meanwhile, religious progressives were horrified to see religious conservatives align with President Trump – so counter to conservative values.

Similar to politics, technology, media and business, organized religion often migrated to more extreme, polarized and combative positions. They played to a narrower base where tribal division and anger toward enemies was rewarded.

The Exhausted Majority – Rise Up

Warfare starts with adrenaline and energy but over time it becomes exhausting – and exhausted we are. The recent headline-making study “Hidden Tribes” reports: “the two-thirds of Americans who don’t belong to either extreme constitute an ‘exhausted majority’…sharing a sense of fatigue with our polarized national conversation, a willingness to be flexible in their political viewpoints, and a lack of voice in the national conversation.”

Calls for civility when bombs are sent to political leaders or congressmen are shot, are no match for the forces of this new “mad-and-blame” industrial complex. The two-thirds of Americans who have had enough must exert intention to stop feeding the beast.

In a word it is called leadership and means each of us embrace a very simple decision: to make our relationships and how we treat each other our number one priority over ideological and theological preferences. It means no longer voting, buying, consuming, and supporting the mad-and-blame industrial complex. It means choosing a new side – the side of relationship, getting along, collaboration, compromise, and working with those with whom we disagree. It will not be easy, and in fact it will be very challenging.

How do we sustain it? I close with this quote by James Finley: “Love protects us from nothing, even as it unexplainably sustains us in all things.”

Robert Hall’s latest book, “This Land of Strangers” is now in paperback. A “recovering CEO,” he has authored 150 published articles and his work has appeared in The New York Times, Forbes, The Huffington Post, The CEO Magazine. www.robert@robertehall.com